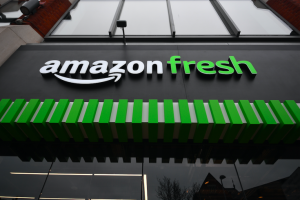 Amazon’s plans to open grocery stores in the Philadelphia region have been rumored for nearly a year, and the tech giant has now confirmed at least one of those locations will be in Warrington Township, Bucks County.

The company revealed this week that it will open its first grocery stores on the East Coast in the near future, beginning with a pair of locations in Washington, D.C.’s Logan Circle and Northern Virginia’s Franconia area. Amazon already has begun hiring for those locations.

Amazon also confirmed two other stores, the one in Warrington and another in Chevy Chase, Maryland, CNBC reported.

The Warrington location is expected to open in the Creekview Center at 425 Easton Road, replacing a former Giant supermarket. The shopping center also has a Target and a Lowe’s.

Warrington Township Board of Supervisors chair Fred Gaines told the Doylestown Patch the Amazon grocery store has been “one of the worst kept secrets in town,” but certain details remain to be figured out.

Amazon has not yet publicly said whether any of the four upcoming stores will be Amazon Fresh stores. The Fresh brand debuted last September in Los Angeles and has since expanded to 11 total locations in Southern California and the Chicago suburbs.

Amazon Fresh locations are known for their tech-enabled features, including smart Dash Carts that enable customers to bypass the checkout line. The company is currently testing a “Just Walk Out” option at one of its Illinois stores. The technology uses a combination of computer vision algorithms and sensor fusion to identify items shoppers put in their carts. Sensors in the Amazon Dash Cart lane process payments using the credit card on a shopper’s Amazon account.

In contrast to Amazon’s Whole Foods brand, Amazon Fresh appeals more to middle class customers and will emphasize speedier fulfillment of online orders, according to Morgan Stanley analysts. A section of the store also is dedicated for pick-up and return of Prime packages.

Last month, Bloomberg reported that Amazon had plans for at least 28 more Fresh locations in addition to the 11 that currently exist. The company reportedly hopes to challenge established supermarket chains.

Two other Amazon grocery stores have been rumored in the Philadelphia area over the past year, including a location at a project planned in Northern Liberties and in Bensalem, Bucks County, where the company signed a lease last summer for a warehouse fulfillment center.

A timeline for the opening of the Warrington location remains to be determined.