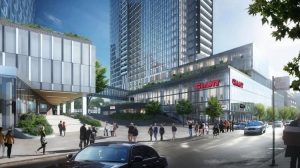 In Philadelphia, several new developments including South Quarter Crossing, Sharswood Ridge at 2000 Ridge Ave., and a proposed development at 1100 Wharton St. will be anchored by grocery stores. They will join 1300 Fairmount, where an Aldi opened last year, and Rodin Square where Whole Foods has a location. Among the pioneers in this regard is Trader Joe’s, which opened in 2002 at 2121 Market St.

Grocery stores also anchor suburban mixed-use projects. In King of Prussia, Wegmans anchored the King of Prussia Town Center at the Village at Valley Forge, Kimberton Whole Foods is part of East Side Flats in Malvern and, most recently, Sprouts opened at the Promenade at Upper Dublin.

Alternatively, municipalities want ground-floor retail to be activated and, outside of restaurants, grocery stores can serve that purpose.

The combination of these factors has led developers to design spaces in new construction projects that can accommodate a sizable footprint required by a grocery store.

While supermarket-anchored retail real estate has always been a cornerstone of commercial properties, investors were especially drawn to them before the pandemic because they were considered internet proof. Retail centers that have a supermarket as the main attraction have been among the few areas of real estate that have thrived during the pandemic.

azLast year also saw the expansion of several grocery chains throughout the region including in Philadelphia. In 2014, there were seven grocery stores in an area stretching from Spring Garden Street to Washington Avenue and, since then, 13 additional stores have opened and another 10 are either under construction or proposed. Giant, Lidl, Sprouts and Acme were among those to open stores or announce new ones. A new entrant to the market this year is expected to be Amazon.

The new Giant at Riverwalk will be the company’s fifth location to open in Philadelphia and, including its Island Avenue fulfillment center, brings the company’s total investment in the city to more than $106 million. The company is planning to hire 220 people to work in the new store.

“Philadelphia’s grocery scene is experiencing a major renaissance and The Giant Co. has been at the forefront, introducing new formats, opening new stores, and expanding grocery delivery services,” said Nicholas Bertram, president of Giant in a statement. “Our Riverwalk store celebrates this transformation, offering an elevated omnichannel grocery experience unlike anything Philadelphia has ever seen.”

The store was designed by Chute Gerdeman, retail design and branding firm based in Columbus, Ohio. Its design sought to incorporate elements that draw from Giant’s heritage as well as its Heirloom Market format, with wood elements as well as Giant’s red and black signature colors.

It will have a food hall, which is a new concept for Giant to incorporate into a store. The food hall will feature products from Mission Taqueria, a Philadelphia-based purveyor of Mexican food, soup and salads from Conshohocken-based Saladworks, and sushi from Hissho Sushi.

The store will also have an outdoor terrace with seating and dining areas as well as sell beer and wine. The store will also have a beer garden with a self-serve tap wall offering more than 40 craft beers, wines, hard seltzer, cider, and kombucha on tap. It will also carry other local items from One Village Coffee, Claudio’s, High Street on Market, Asher’s Chocolates, and Isgro Pastries.

The Giant will have a ground level parking garage with direct access to the store’s lobby.

The company named Jessica Fischer, a 22-year veteran of the company, as manager of the Riverwalk store. Fischer had most recently worked at the company’s University City Heirloom Market.